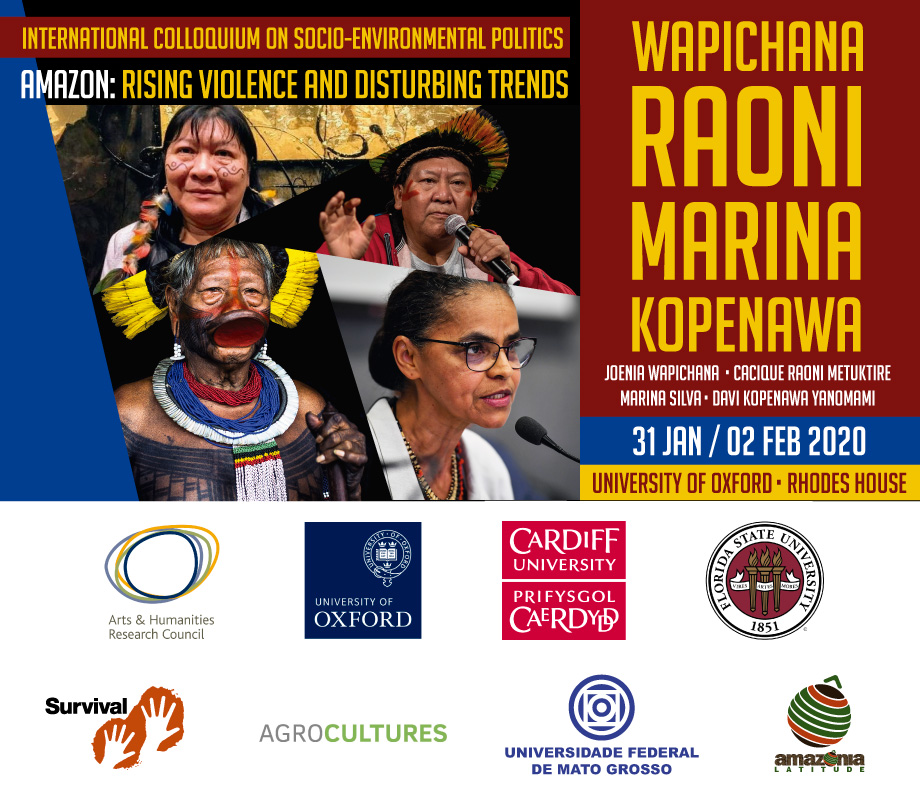 This International Colloquium will bring important leaders from indigenous and civil society movements together with academics working on the Amazon. The goal is to debate socio-environmental politics and interrogate legacies from the past, as well as the rising rates of violence, public policies, and the disturbing extractivist pressures facing the region. The Colloquium will include presentations, talks, round tables, artistic expressions, and cultural activities aimed to elicit critical reflection and formulate creative recommendations for national political leaders, representative associations, multilateral organizations, and our global society. The event is part of a wider effort to decolonize scientific practices through a North-South dialogue that recognises the importance of an ethics based on socio-environmental reciprocity. This means conducting research with and for the benefit of indigenous and local communities, allowing them to express their own voices and strengthening their involvement in the transformation of the contemporary Amazon.

The colloquium was designed to stimulate the debate and exchange of ideas between three groups of speakers: first, those who live in the Amazon Region and represent its indigenous population, peasant family farmers, riparian groups (ribeirinhos) and other rural and urban inhabitants impacted by mainstream development and environmental degradation. Second, academics from various universities in Europe, North and South America, who have conducted critical studies on the legacies of colonization and socio-political asymmetries resulting from the ideology of modernity and modernization. Third, policy-makers, diplomats and politicians responsible for the formulation and implementation of public policies and governmental decisions. 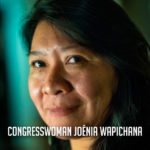 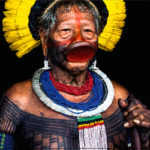 INFO
Cacique Raoni Metuktire is a native Brazilian leader and environmentalist. He is a chief of the Kayapó people. He is internationally famous as a living symbol of the fight for the preservation of the Amazon rainforest and indigenous culture. He has fought for four decades to save his homeland, the Amazon forest. He has been the subject of many documentary films and news articles and has met with multiple world leaders to discuss the plight of the Amazon. Because of his work and dedication to environmental efforts, he has been nominated as a candidate for the 2020 Nobel Peace Prize. 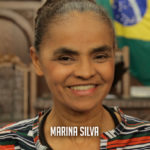 Marina Silva – Former Senator / Minister of the Environment of Brazil

INFO
Marina Silva is an environmental leader and Brazil’s Former Minister of the Environment. She was born in the Amazonian state of Acre and began to advocate for the preservation of forests and biodiversity from a young age. Since her involvement in politics, she has run for president three times with an agenda which emphasizes the need for sustainable development. She is now a spokeswoman for the Sustainability Party (REDE). She has received numerous prestigious prizes such as the Goldman Environmental Prize, the title of Champion of the Earth by the UN, and the Sophie Award. 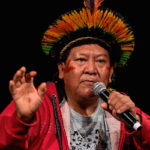 INFO
Davi Kopenawa Yanomami is a shaman and spokesman for the Yanomami people. He led the long-running international campaign to secure Yanomami land rights, for which he gained recognition in Brazil and around the world.  In 1989, Davi won a UN Global 500 award in recognition of his battle to preserve the rainforest. Davi continues to play a crucial role in battling for his people’s rights, and is the driving force behind an innovative bilingual education project which aims to help the Yanomami defend their rights themselves. In 2004, with other Yanomami leaders, he founded the Yanomami rights organization Hutukara (the part of the sky from which the earth was born). He is the author of the book The Falling Sky (2013). Davi Kopenawa / Hutukara Yanomami have just won the Right Livelihood Award this year by the The Right Livelihood Foundation. 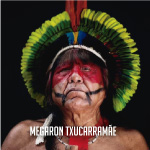 Mekaro-ni, known as Megaron Txucarramãe, a warrior of noble family, Raoni’s nephew, was prepared by Orlando and Claudio Villas Bôas to be an indigenous leader and mediate with the “white world”. He became the first indigenous to head the Xingu Indigenous Park. He worked for 26 years as coordinator of FUNAI – the National Indigenous Foundation, an organ of the Brazilian federal government. He has participated in various contact fronts and land demarcations. He was supervisor of the Xingu Indigenous Park from 1984 to 1994 and director of FUNAI – Colíder / MT from 1995 to 2011. He was also a founding member of the Raoni Institute in 2001. Megaron was dismissed from his position as FUNAI regional coordinator due to his open opposition to the Belo Monte, Teles Pires and Tapajós hydroelectric plants, but  continued his work with FUNAI until 2019. His strength and determination, however, remain firm in the struggle to defend his people and territory.

Bepró Metuktire was born in an area between the Brazilian Cerrado and the Amazon Rainforest, in the Capoto village, part of theJarina Indigenous Territory, Peixoto de Azevedo. He is a young leader, son of Chief Beptok and will one day take the place of his father. He studied in the city, learned Portuguese, and worked for FUNAI at an indigenous inspection post. He is one of the first Kayapó indigenous filmmakers and has recorded the struggles and demonstrations of his people. He has been the indigenous interpreter of the Raoni Institute for over a decade. He is a link between indigenous and non-indigenous people and works to ensure the respect and defense of Kayapó and Mebengokrê territories. 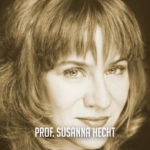 INFO
Professor Hecht is a specialist on tropical development in Latin America, especially the Amazon Basin and Central America. Her research focuses largely on land use change in the Latin American tropics. Her work represents a remarkable integration of the humanities, including the history of ideas, social and environmental history, and the social sciences of development into the dynamics and sciences of tropical and planetary change. She is one of the founders of the analytical approach known as Political Ecology. As one of the founders of the analytic approach known as Political Ecology. She has worked for many international multilateral agencies and received prestigious grants such as funding from the MacArthur Foundation and the Ford Foundation. 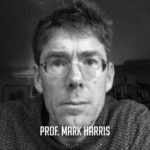 INFO
Professor Mark Harris works at the School of Philosophical, Anthropological and Film Studies at St Andrews. His research interests have focused on the peasantries who live along the waterways of the Amazon river and its tributaries. His monograph, Life on the Amazon looked at questions of peasant social life and their history in the region and beyond. His second monograph, Rebellion on the Amazon, uses archival documents in Brazil, Portugal and Britain to study a peasant insurgency in the Amazon in the 1830s. His fields of interest include ethnohistory, ecological anthropology, knowledge in and methodology of the social sciences, and the practice of teaching and learning. 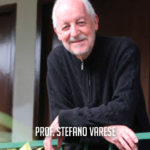 INFO
Stefano Varese is Professor Emeritus of Native American Studies at the University of California. He is the director of the Indigenous Research Center of the Americas. He is an anthropologist and specializes in indigenous people (American Indians, Native Americans) of the Americas. His areas of concentration include Indian community development, agroecological and sustainable development, cultural, economic, political self-determination, territorial management, rural-urban migration, transnational migration, cultural resource management, poverty alleviation strategies, and human rights. 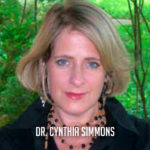 INFO
Cynthia Simmons is an Associate Professor at the Center for Latin American Studies (LATAM) at the University of Florida (UF). She is a human geographer whose research addresses the interaction of economic development and environmental policy in Less Developed Countries (LDCs). She is especially interested in the social consequences of these interactions, and much of her current work examines agrarian reform and land conflict in the Brazilian Amazon The conceptual lens for her research is derived primarily from a political economy approach. The theoretical underpinning of her work emphasizes the local, and considers the importance of Place as essential to understanding social and environmental problems. 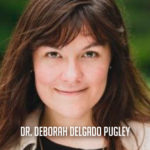 INFO
Deborah Delgado Pugley is a professor of sociology at the Pontificia Universidad Catolica del Peru where she works at the Center for Research on Sociology, Economics, Politics and Anthropology (CISEPA). She holds a PhD in Development Studies and Sociology from the Université Catholique de Louvain and the Ecole des hautes études en sciences sociales of Paris. She is a sociologist with theoretical and applied experience in both multilateral politics and environmental issues at the community level. She has done extensive fieldwork in Bolivia and Peru. Her work focuses on indigenous social movements, human and environmental rights, natural resources management, climate change policies related to forests and development. 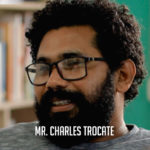 INFO
Charles Trocate is a writer, philosopher, and political activist. He is a member of the MST in Pará, Brazil’s Landless Workers Movement, which fights for the land, for Agrarian Reform, and for a more just and fraternal society. He is the founder and leader of MAM -the Movement for Popular Sovereignty in Mining. MAM advocates for sovereignty of the Brazilian people over the country’s resources. In addition to his political role in the region, Charles Trocate is also a poet and writer. He is the author of many books including 1993 and Ato Primavera. 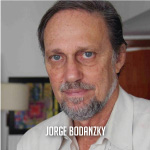 Jorge Bodanzky was born in 1942 in São Paulo, São Paulo, Brazil. He is a filmmaker, writer, and photographer. He is most known for his films, some of which include Iracema – Uma Transa Amazônica (1975), The Mucker (1978) and Drittes Jahrtausend (1982). He went to the University of Brasilia and then studied cinematography in Germany. He began his career as a photoreporter. He has won multiple awards from film and documentary film festivals. Many of his films focus on the boundary between documentary and fiction and he has worked alongside internationally recognized producers such as Orlando Senna and Alexander Kluge among others. 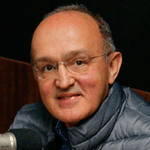 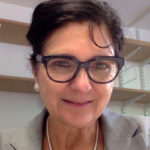 Dr Laura Rival is an Associate Professor at Oxford where she has been teaching and researching the anthropology of nature, society and development since 2001. In addition to her position at the Oxford Department of International Development (ODID, also known as Queen Elizabeth House, QEH), where she has directed the MPhil in Development Studies, she is an active member of the School of Anthropology (SAME), the Institute of Human Sciences (IHS), and the Latin American Centre (LAC). Since 2010, she has investigated various ‘carbon projects’ to examine empirically how the concept of ‘ecosystem services’ is used in practice to guide decisions about the allocation of resources provided by nature. With her students and research collaborators, Laura Rival has studied a wide range of conceptualizations and uses of the Amazon biome, including the mechanisms by which humans know and symbolize the biological world, reproduce and transform their social and cultural worlds, and contribute to the making of the forested landscapes they inhabit. 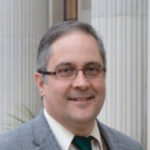 INFO
Antonio Ioris is a senior lecturer in human geography at the School of Geography and Planning at Cardiff University. His academic interests rest primarily in the political dimension of the interconnections and interdependencies between society and the rest of nature. Most of his current research is related to social and environmental justice, the multiple obstacles faced by marginalized groups and creative reactions at different geographical scales. The work is intended to have both academic and more-than-academic relevance and is focused on socionatural processes, on the political economy of development and environmental regulation, and on governance and politics. 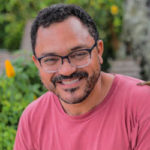 INFO
Marcos Colón received his Ph.D. in Spanish and Portuguese Cultural Studies from the University of Wisconsin-Madison in 2019. His research focuses on Brazilian literary and cultural studies, with a particular emphasis on representations of the Amazon in twentieth- and twenty-first-century Brazilian literature and film. He has produced and directed two documentary films that represent diverse perspectives on humanity’s complex relations with the natural world: Beyond Fordlândia: An Environmental Account of Henry Ford’s Adventure in the Amazon, 2018 and Zo’é, based on his experiences with the Zo’é tribe, an Amazonian indigenous community that has had little to no contact with the outside world (2018). He is the editor and creator of Amazonia Latitude, a digital environmental magazine.

Programme of the 5th Agrocultures Colloquium:

University Rooms – Accommodation in the university

Transport from London airport (by coach)