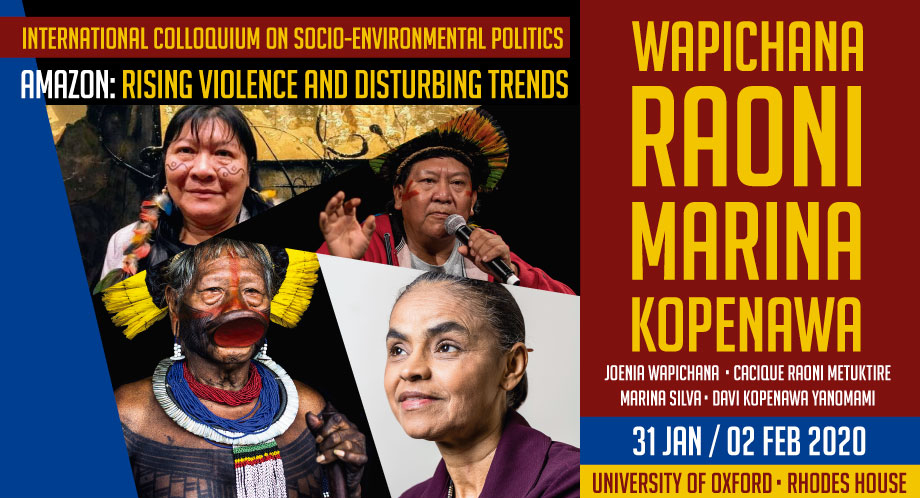 The International Colloquium “AMAZON’S RISING VIOLENCE AND DISTURBING TRENDS”, to be held in the United Kingdom in 2020, will bring important indigenous leaders, peasants and social movement activists to dialogue with teachers, artists and researchers concerned with socio-environmental problems of the Amazon Region. The main objective will be to debate past legacies, to question responsibilities and to assess the alarming rates of violence, inequality and food insecurity.

The Colloquium will include presentations, round tables and artistic expressions that will foster the exchange of experiences and information on topics of great complexity. The interaction between academia and society will have the purpose of creatively contributing to the formulation of public policies and transformative social mobilization. The event is part of the effort to decolonize scientific practices through a broad North-South dialogue based on an ethic of socio-environmental reciprocity and the quest to overcome injustices associated with authoritarian economic development. This means conducting research together and for the benefit of regional populations, allowing them to express their demands in a plural and autonomous way and to take an active part in the production of knowledge.

It is part of the series of activities of the Agrocultures Network and was planned to promote interaction between three main groups of interlocutors: first, the poor and excluded majority of the Amazonian population, such as indigenous groups, family farmers, riverine residents and other rural and urban inhabitants affected by uneven development and socio-environmental degradation; second, professors and students from various universities and research centres dedicated to better comprehending socio-spatial asymmetries and the subordinate insertion of the Amazon into the globalized world; third, authorities, policy makers and planners responsible for formulating the legal framework and implementing government plans.

The Colloquium will produce a number of concrete results, such as technical and scientific publications, denunciation of the grave situation facing many social groups due to the growing attack on basic rights and on the commons, and proposals to the national governments of the region that can inform changes in economic social and environmental policies.

For more information about the colloquium here.