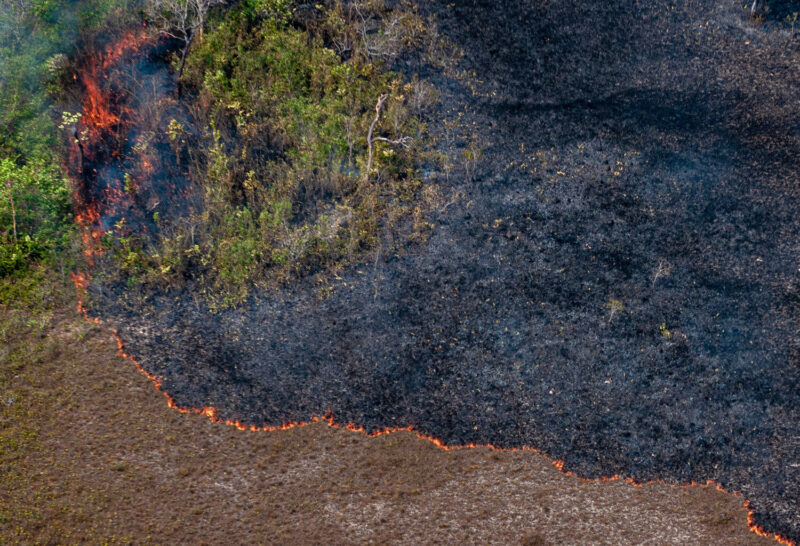 The Amazon biome is the world´s largest remaining tropical forest, hosting around 10% of the planet’s biodiversity, which includes around 40,000 plant, 3,000 fish, 1,300 bird, 400 amphibian, 378 reptile and 300+ mammal species. The Amazon River, with approximately 1,100 river tributaries, is the world’s largest river drainage system representing 20% of the world fresh water.

The biome is important in maintaining the rainfall regime in the south/southeast Brazil and part of South America. The phenomenon called “Flying Rivers” is a virtuous cycle of rainfall and evapotranspiration in the rainforest ecosystem that delivers humidity as far south as Argentina, through aerial massesFlying RiversThe Flying Rivers Project. https://riosvoadores.com.br/english/ Accessed in June 25 (2020). The rainforest recycles the moisture five to six times before it turns southward, feeling the proximity of the high wall of the AndresWinds of Will: Tipping change in the AmazonT. E. Lovejoy, C. Nobre, Winds of will: Tipping change in the Amazon. Sci. Adv. 5, eaba2949 (2019).

The soil, as part of this important ecosystem, has an important role in the conservation of this biome. In general, impoverished soilsAmazon SoilsT. E. Rodrigues, “Amazon Soils” in V.H. Alvarez, L.E.F. Fontes, M.P.F. Fontes, Eds. The Soils in the Brazilian Great Morphologic-Climatic Domains and the Sustainable Development. (SBCS-UFV, Viçosa, 1996). pp. 19-60. (In Portuguese). and, sometimes, very fragile soil ecosystemsWhite‐sand Ecosystems in AmazoniaJ.M. Adeney, N.L. Christensen, A. Vicentini, M. Cohn-Haft. White‐sand Ecosystems in Amazonia. Biotropica, 48(1): 7-23 (2016). https://doi.org/10.1111/btp.12293 are the basis for an exuberant vegetation. Many times, the lushness of the rainforest derives from the fact that the forest is on a climax in which every nutrient needed by the plants is produced by the recycling of the very own forest.

The concerns with this brittle ecosystem, essential for the well-being of the planet, have been discussed in many important environmental and economic forums for decades. In the World Economic Forum in Davos, during the Panel Securing a Sustainable Future for the Amazon, the Former USA Vice President Al Gore called the attention to the inappropriateness of trying to link land clearing to implant agriculture to the fight against poverty. He recalled that the soils in the Amazon region are, in general, impoverished and it is a false hope to think that agriculture there would be a sustainable answer to poverty.

In addition, there is a huge and imminent risk for the Amazon region. Well-known and worldly recognized scientists Thomas Lovejoy, American Environmentalist, and Carlos Nobre, Brazilian Climatologist, in an EditorialAmazon Tipping PointT. E. Lovejoy, C. Nobre, Amazon Tipping Point. Sci. Adv. 4, eaat2340 (2018 to Science Advances revisited, revised and improved the concept of “Tipping Point for the Rainforest System”, which is the critical threshold where the conversion of the tropical rainforest to dry savanna and maybe desert could be irreversible. To contextualize the problem, they posed two questions: How much deforestation would be required to cause the cycle to degrade to the point of being unable to support the rainforest ecosystem? Where might the tipping point be for deforestation-generated degradation of the hydrological cycle?

Their answer translated their concerns: we believe that negative synergies between deforestation, climate change, and widespread use of fire indicate a tipping point for the Amazon system to flip to non-forest ecosystems in eastern, southern and central Amazonia at 20-25% deforestation. Moreover, they asked to curb further deforestation, by reducing the deforested area to less than 20%, for the commonsense reason that there is no point in discovering the precise tipping point by tipping it.

Their follow up in the subjectWinds of Will: Tipping change in the AmazonT. E. Lovejoy, C. Nobre, Winds of will: Tipping change in the Amazon. Sci. Adv. 5, eaba2949 (2019)., warns that current deforestation is substantial and frightening: 17% across the entire Amazon basin and approaching 20% in the Brazilian Amazon and already there are ominous signals of the tipping point in nature.

There is no doubt that we are very close to this threshold. This ecosystem is now in unprecedented danger due to the deforestation, land clearing and fire. The cutting of the forest, which was decreasing slowly, now started again to escalate in a dangerous pace in the recent past years and seems to be even worse this year. The tipping point for the Amazon ecosystem turning the rainforest into either a savanna, in the clayey soils, or a desert, in the white-sand systems soils, is just like a gray rhino that is coming and the Brazilian government does not make any effort to get out of its way.

Furthermore, the Covid-19 pandemic discloses to the world the fact that, especially in the Amazon region, the Indigenous Peoples life and culture are in jeopardy. The Brazilian Institute of Geography and Statistics estimated in the last Census of 2010 that there were 817,963 Indians, in 305 ethnic groups, speaking 274 languages. From these, 63.4% live in the North region, with Amazonas, Pará and Roraima States being the most populated by these Indigenous Peoples.

Sebastião Salgado, well-known Brazilian photographer, when launched his campaign against extermination of these peoples said: “The indigenous peoples of Brazil face an extreme threat to their survival due to the coronavirus pandemic. Their situation is doubly critical, because the territories recognized for their exclusive use are being invaded by illegal activities by miners, loggers and land grabbers”. He mobilized hundreds of personalities all over the world and, so far, around 300 thousand persons signed a manifest in defense of the Brazilian Indigenous peoples, asking for creation of a task force to protect them.

According to Socioenvironmental Institute, recent numbers of the Covid-19 from the APIB (Articulation of the Indigenous Peoples of Brazil) are as follows: 35,024 confirmed cases and 841 deaths, affecting 158 ethnic groups. These numbers are definitely of concern.

No doubt that the Amazon region may be facing a new tipping point. Now a tipping point for some groups of Indigenous Peoples, which is the critical threshold where their life and culture can fade away from the planet.

To make this scenario still worse, apart from the Covid-19, the tipping points for either the rainforest ecosystem or the Indigenous People’s survival have an umbilical link. The same chain of events that can provoke one will be provoking the other. Disordered deforestation for agriculture and cattle ranching, fires, mining, logging and land grabbing are the common enemies for both the rainforest ecosystem and the Indigenous Peoples’ life and culture in Amazon.

Unfortunately, the instruments to fight against these tipping points are in hands of a government that has proven by acts and words that it is not concerned with neither the rainforest biome protection nor the Indigenous Peoples’ wellbeing and survival. As an example of such acts, President Bolsonaro sanctioned, but with vetoes, a bill passed in the Brazilian Congress with measures to protect indigenous peoples during the coronavirus pandemic.

He vetoed measures that would preserve life of the Indigenous Peoples such as “access to drinking water” and “free distribution of hygiene, cleaning and disinfection materials for villages” and vetoed the government’s obligation to carry out actions to guarantee “the emergency supply of hospital beds, intensive care, ventilators and blood oxygenation machines” to the Indigenous Peoples. To justify the vetoes the argument was that the bill had created mandatory expenditures without demonstrating the respective budgetary and financial impact, which would be unconstitutional.

Now is time to raise our awareness to the need to persuade the Brazilian government that the health of the Amazon rainforest ecosystem is vital for the global climate control and biodiversity preservation and that the Indigenous Peoples’ lives matter and deserves to be protected.