From Trees, Land and Man: the shifting environmental health of the Amazon Rainforest 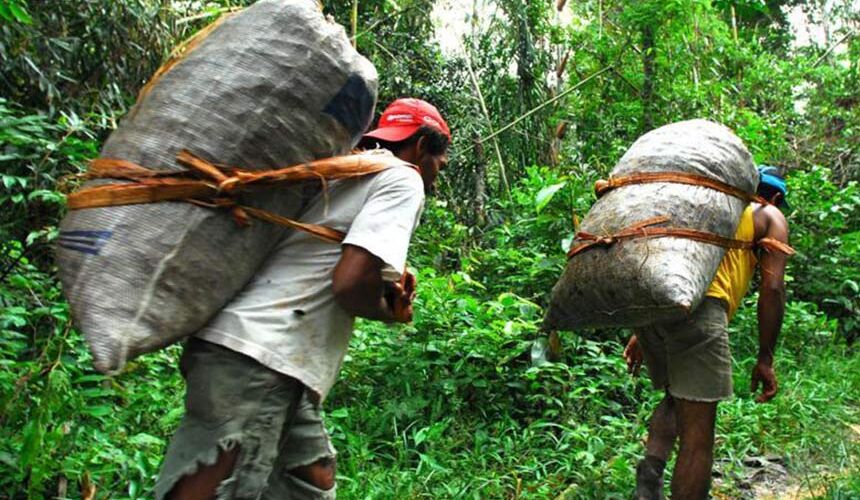 The Amazon Rainforest, home to an estimated 30 percent of the planet’s biodiversity, has long been subject to human intervention. Eight thousand years ago, Indigenous peoples lived in and farmed the Amazon, cultivating and eventually domesticating crops such as the cocoa bean and the brazil nut long before European colonizers arrived. Five hundred years ago, many of these Indigenous peoples were victims to genocide and, centuries later, are survived by a forest that still reflects their impact in much of its structure and growth (Meyer, 2017).

However, in terms of sustainability and long-term impact, this lasting alteration of the Amazon by Indigenous peoples is in no way comparable to the severity of damage caused by modern human practices. Modern changes to the Amazon result not from steady cultivation, but from deforestation at a rapid rate that is only increasing.

The destruction of the Amazon inarguably contributes more harm to humanity and to the planet than it does good, and the consequences of its deforestation will only worsen as this continues. Deforestation of the Amazon Rainforest endangers plant and animal species, many of which may contain undiscovered medicinal properties, harms remaining Indigenous populations, and greatly contributes to climate change by eradicating CO2-capturing and oxygen-producing trees and plants. The unparalleled value of the Amazon Rainforest greatly outweighs any economic or agricultural benefit to be gained from its ruination, and significant action must be promptly taken to protect the forest if it is to survive the next century of human existence.

Industrial-scale deforestation in the Amazon Rainforest began in the 1960s when the Brazilian government, during a period of high inflation and economic crisis, turned to the forest to accommodate expansion, mainly in the forms of cattle ranching and soy farming. Other practices occurred in conjunction with these, one being commercial logging. However, when a certain area does not contain sought-after tree species or is simply too large, “slash and burn agriculture” is employed instead: multiple square miles of forest can be burned down at one time, releasing vast amounts of CO2 into the atmosphere in the process of clearing space to graze cattle and grow crops (Barber, Chomentowski, Skole, & Urquhart, 2001).

Deforestation of the Amazon has swelled into a multi-billion-dollar industry maintained not only by Brazil, but by parties such as the United States and Europe, who import beef, soy, and palm oil (Lai, 2021). While those in power find prosperity in the destruction of the rainforest, the health of those living in the Amazon region remains significantly impacted by the pollution of the air, land, and water from agricultural pesticides and from the continuous burning of the rainforest. Some 20 million Brazilian citizens, many of whom do not have access to quality healthcare, suffer from increased “respiratory and cardiovascular diseases, as well as premature death” (Human Rights Watch, 2020). Indigenous peoples living within the rainforest are even more affected by its deforestation and have no choice in suffering the consequences of practices beyond their control.

The Amazon Rainforest measures approximately 2.72 million square miles and is home to over 3 million species, including over 16,000 tree species, 40,000 plant species, 1,300 bird species, and 437 mammal species (Butler, 2019). This vastly biodiverse array of life accounts for an estimated 30 percent of all species on Earth.

In addition to the plant and animal species that call the Amazon home, 400 Indigenous tribes live in the rainforest, and included in these numbers are an estimated 100 uncontacted tribes (Survival International). Indigenous peoples have lived sustainably in the Amazon for centuries and rely on this region for their continued survival and way of life. These people are not only harmed by the effects of deforestation but are its direct victims; Indigenous people today are threatened by encroaching deforestation that clears the forest up to their territory lines, and often invades their lands.

In 2018, far right-wing Jair Bolsonaro was elected president of Brazil and quickly fulfilled his campaign promise to exploit the Amazon for profit with a complete lack of regard for Indigenous peoples or environmental consequences. Bolsonaro reversed protections for the Amazon that had been in place before his time in office, and actively violated many of Brazil’s previous legally binding commitments, including the Paris Agreement on Climate Change and even Brazil’s own National Policy on Climate Change (Human Rights Watch, 2020).

Bolsonaro and his administration emboldened farmers and cattle ranchers with the assurance that their government would not take action against them for any amount of illegal deforestation, harmful activity, or displacement of Indigenous peoples (Lingel, 2020). As a result of this, deforestation of the Amazon dramatically increased and reached levels not seen in decades, and it now continues to burn at a faster rate than ever before (Butler, 2019).

Home to one of the largest and most biodiverse collections of life on the planet, the Amazon Rainforest has great intrinsic value. There is an insurmountable and immeasurable worth in the Amazon as it naturally is. The rainforest stores some “… 120 billion tons of carbon, and about half of all the annual rainfall… [is transpired] by the forest back into the atmosphere” (Schwartzman, 2013). Of all the greenhouse gases released into the atmosphere as a product of human activities such as burning fossil fuels and deforestation, CO2 claims the most significant role in driving climate change (Jacoby, Prinn, & Reilly, 2003). Without the rainforest to process and store it, the increased levels of CO2 in the atmosphere alone would serve as a catalyst for devastating climate change.

At this time, an estimated 17 to20 percent of the Amazon has been completely deforested, and an additional 17 percent has at the very least been degraded. Some 10,000 known plant and animal species are facing a high risk of extinction. Current science places the Amazon’s tipping point – the point at which “it will no longer be able to generate its own rainfall and support its rainforest ecosystems” – at 20 to25 percent deforestation (Amazon Conservation). At the current rate of deforestation currently experienced by the Amazon, it is likely to be past saving in less than a few decades.

The loss of the Amazon Rainforest would result in greatly accelerated global warming, mass extinction of plant and animal species, public health crises, and the endangerment of the Indigenous peoples who depend on this area to live.

Beyond this, the Amazon Rainforest holds immense value – both potential and confirmed – for the advancement of modern medicine. “More than 25% of the drugs used by modern medicine use plant compounds directly…” (Running, 2016) and “over 50 [percent] of prescription drugs are derived from chemicals first identified in plants” (Fullerton, 2017).

Humans have used plants as medicine since prehistoric times, and this practice and medicinal knowledge has been passed down amongst Indigenous tribes in the Amazon for centuries. Many drugs for the treatment of diseases such as malaria, glaucoma, and leukemia would not exist without plants from the Amazon Rainforest. The Amazon’s merit to modern medicine is an established and irrefutable fact, and many argue that since much of the Amazon has been unexplored, combined with the innumerable undiscovered species within it, this is evidence enough that countless more precious medicines are yet to be found.

Current scientific research on the Brazilian social wasp has found that its venom kills cancer cells without damaging the healthy cells around them. Although still in the early phases of testing, this research is just one example that demonstrates the possibilities the rainforest provides (Barnes, 2017). There is much medicinal value and potential in the Amazon Rainforest, and this potential can be realized and utilized for the benefit of the continued health of the human species without endangering the rainforest it comes from, and without harming the Indigenous peoples who live within its forests.

The deforestation of the Amazon Rainforest is a multi-billion-dollar industry that spans across the globe and is fueled by many interests, some being economic, agricultural, or political. Loggers in the Amazon, for example, will either target specific species of trees or will harvest every tree within a given area to maximize profits. When done legally, loggers operate within authorized quotas and leave protected areas and Indigenous territories untouched.

Legal logging will always cause some level of harm, as it requires paths to be cleared and unavoidably results in collateral damage in the form of impacted trees and harmed or displaced wildlife. However, logging provides job security and income for many and procures essential materials used in everyday life. Nevertheless, even when practiced within the confines of the law, all deforestation inevitably results in CO2 emissions, habitat loss, and species endangerment.

Furthermore, an estimated 90 percent of the deforestation in the Brazilian Amazon is illegal due to a lack of environmental law enforcement and a noted absence of concern by the Brazilian government (Rodrigues, 2021). With the vast majority of deforestation in the Amazon Rainforest being illegal and considering President Bolsonaro’s complete disregard for harm done to the climate, to Amazonian species, and to Indigenous peoples within the forests of the region, there is very little room or reason for confidence in the small percentage of deforestation that is done legally. Although it cannot be argued that there is no benefit to the deforestation of the Amazon, what benefit there is does not begin to measure against the devastating costs and repercussions already suffered. Any perceived benefit of the deforestation of the Amazon Rainforest is inconsequential in the face of what the region is projected to become if things do not change.

In closing, there are many arguments for and against the deforestation of the Amazon Rainforest. As one of the greatest concentrations of biodiversity in the world and ancient home to hundreds of Indigenous tribes, the Amazon holds immense value thanks to its diversity of known species, the potential of species yet undiscovered, and its natural role in storing the world’s rains and processing great amounts of harmful CO2 emissions. Although there is profit and some benefit in deforesting the Amazon, its exploitation is a short-sighted slide to the bottom of an already very frayed rope. Anything gained from deforesting the Amazon cannot negate the cost of its incurred damage, nor the wreckage sustained to the already delicate climate.

Madelynn McIver is an undergraduate student majoring in Environment & Society and Public Health at Florida State University. Growing up in the coastal town of Pensacola, she developed a deep interest in and respect for nature at an early age, which came to encompass human, environmental and animal activism in her adult life.

Marcos Colón holds a PhD in cultural studies from the University of Wisconsin-Madison, is a professor at the Department Public Health at Florida State University and director of the documentaries “Stepping Sofly on the Earth” and “Beyond Fordlandia”.